The first one launched on 26 October and is called Faces. 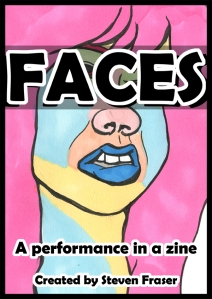 The next two follow on 2 November and 9 November respectively.
They can be read here on the above dates. 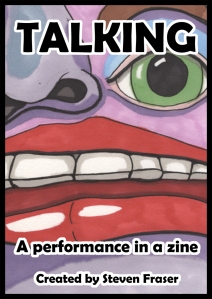 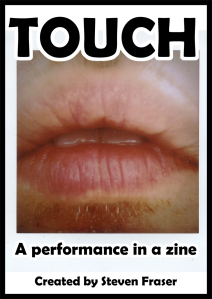 Some extra info on the project can be read below, but please visit the Mainspring Private Plays website for full info and details –

Private Plays are intimate performance encounters that take place in unusual settings. These three exciting new plays have been created exclusively for Mainspring Arts by writer, artist and animator Steven Fraser, who is also founder of Do It Theatre.

Private Plays are designed specially for autistic people – although you don’t need to be autistic to read and enjoy them. These three plays – Faces, Touch and Talking – all take place in your home.

Recently I did a 2 week residency at Paisley Arts Centre.
Here I spent some time developing Letters We Leave Behind. The performance is now at a stage that I can present it to an audience. I will be doing this in Dundee and again in Paisley soon (more info on both later). Below is a blog post that I wrote for Paisley Arts Centre. I wrote this to explain my thinking behind the show and to describe what I got up to during the two weeks. 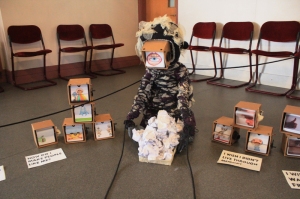 My name is Steven Fraser and I am an artist, writer and animator. I create performances where actors and performers are absent. Only the audience and a facilitator is present. It’s an experimental form of performance that I have been developing for several years. I present this work under the name Do It Theatre. The idea stems from my relationship to autism and how to present transgressive and subversive performance for an audience who express neurodiverse behaviours. I call this form of performance Private Plays and have previously presented my work at various festivals and events including the Hidden Door Festival in Edinburgh, Sydney Fringe Festival Australia, New Diorama Theatre London and Glasgow Zine Library, amongst others. For Out of Place Festival and my 2-week residency I wanted to further develop this form of experimental theatre and use interactive puppets within the space with a new performance called Letters We leave Behind. I began developing the idea for ‘Letters We Leave Behind’ 2 years ago after I was awarded a Starter For Ten commission from the National Theatre of Scotland. I used this award to develop my puppet making skills and wanted to fully utilise this during my time in Paisley. 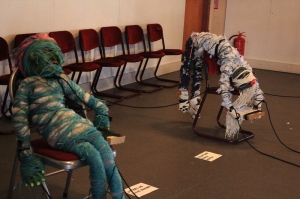 Private Plays are unique live art encounters where participants read illustrated performance scripts within installation spaces. The participants read the script to themselves and the illustrations and the location spark the reader’s imagination. It is performance without performers, loud music, sound and mood lighting. The uncomfortable stimulus, that may affect people who live with autism, has been removed to create an original experience. Private Plays open up live art to new audiences, as the performance is presented as text that audiences can follow. For Letters We leave Behind I wanted to remove the performance script and have the text in a series of letters that are left within the performance space and held by 5 puppets. The letters were written to be read in any order, so it is up to the audience to dictate the pace and flow of the show. This technique makes the show more interactive and gives the audience the chance to experience Letter We Leave Behind in a different way. 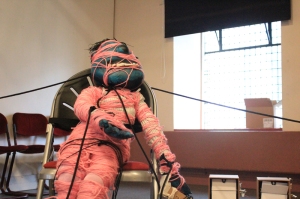 The concept of Letters We Leave Behind is that the are 5 different interactive puppets present in the installation space. They represent 5 different people that have entered the life of the participant (I call people who view the show participants). The puppets are each holding letters and each letter gives advice to the participant and imparts a story. 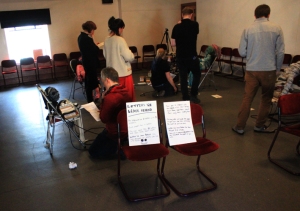 I began my residency by thinking about space. I had already partially created 5 puppets for the show, but needed to see how they would fit into the space I had been given. From here I would adapt the puppets and work out how people would interact with them. I moved the puppets around, attached strings to them, pushed them, pulled them and dragged them around the room. I realised that this wasn’t working and discovered that leaving the puppets alone and giving instructions to the participants to interact with the puppets as they see fit may work best. If people want, they could pull the strings harshly. The puppets have been designed to have long limbs and be sturdy, so strong physical interaction is possible. Participants may wish to leave the puppets alone and just read the letters. All options are available and valid and can be determined by the participant.

During my time I added details to the puppets and considered how they would each hold the letters. Each puppet has a box and in their hands that contains the letters. I adapted the boxes to be more obvious and to ensure people knew to take the letter. This gives the show a nice flow. People will not be left confused at what to do and can go to any of the 5 puppet to take a letter. 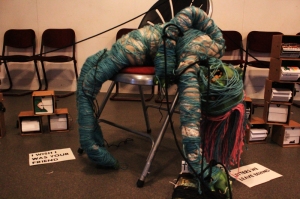 During my residency I also adapted the letters. I thought about how to present the text and how the letters should be written. One letter is presented as a small zine, another is a poem. I thought about the nature of letter writing and how personal and intimate letters are. This helped convey the themes of the show. I am interested in intimacy and solitude in performance and letters seem to reflect this, due to their personal and private nature.

After thinking about space, puppets and the letters, I also created some props for the show. This included small boxes that presented mechanical flipbook animation. These props were created to draw the eye of the participant and lead them around the space. The final stage of the residency was a sharing to gather some feedback before I can present the show to an audience. Here I witnessed how people interacted with the puppets and moved around the space. I realised that people connected with the letters. It was very pleasing to see people sitting down and taking time to read what was written. Some participants also interacted with the puppets, but not in the harsh violent ways that were possible!

Overall I learned a lot about Letters We leave Behind. People seem to comment on the darkness of the show and still mistake autism as affecting only children (my shows are for adults and include mature themes). I understand that presenting puppets in performance there will be strong links to children’s theatre, however the themes and presentation of the show subvert and present something different that will hopefully make participants think about the topics of Letters We Leave Behind.

I am looking forward to take the show further and consider new props to include in the installation and new locations and venues to stage Letters We Leave Behind. My time at Paisley Arts Centre made me realise I have a powerful show that is presented in a unique and interesting style.

So Delay was presented at the Sydney Fringe. It was at the Old 505 Theatre in Newtown.
I was in Sydney as my short film What It Feels Like won the International Documentary Award at the Focus On Ability Film Festival. I was there for 2 weeks, thanks to the festival and took the opportunity to present Delay at the Sydney Fringe. I has an awesome time! Would love to go back and do it again sometime.
More news on 2 more performances of Delay real soon.

We presented Ten Little Memories at the Hidden Door Festival in Edinburgh on June 2 and 3 2016. Here is a slideshow of photographs from the event.

We had some animation and Flipbooks form our show Creature on display at the basement gallery in Summerhall, Edinburgh on March 5 – 12. This was part of the Paradigm Exhibition. The event was a success and attended by many people. The was lots of exciting art on display and here are some photos of our flipbooks. 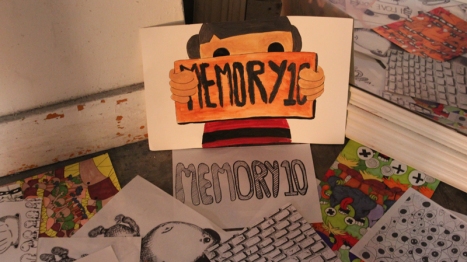 We’re doing 3 performances of Ten Little Memories at the Hidden Door Festival in Edinburgh on 2 and 3 June. Below are links to the event pages.

We had a big announcement earlier this week about Ten Little Memories and we have another one. We are bringing the show to Dundee on May 7 as part of the Ignite Dundee Festival.

Performances will be at 3pm and 8pm and cost £3. 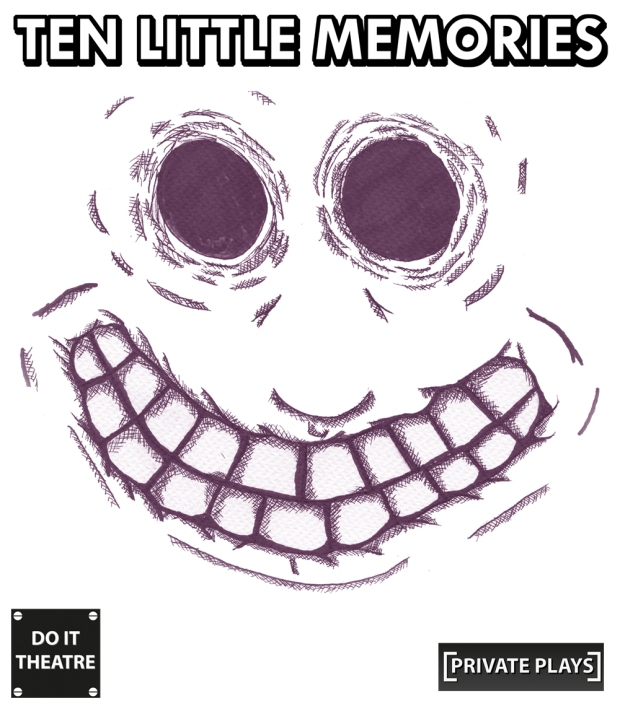 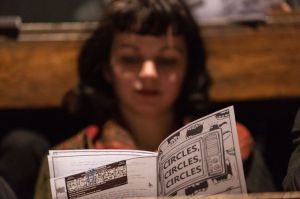 As this was an experiment for us we are still looking into presenting Private Plays in this method. Ideally we would like to take the concept to spoken word and theatre scratch nights. This may involve adapting the idea of Private Plays some more to suit that style of event. 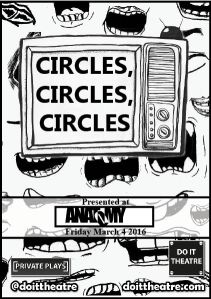 We will keep you posted on more events like this and will post up some videos of Circles, Circles, Circles at Anatomy next week. We will also update the Private Plays section of our website to give a documentation of the event and a pdf of the zine if you would like to read a digital copy. 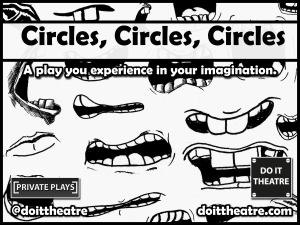 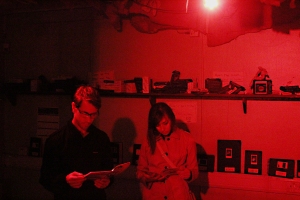 We thought it would be a good idea to look at previous Private Plays.

Here we see a  recent image from Creature at the Hidden Door Festival 2015 in Edinburgh.

Check back on the blog for more images and updates on new performances.

My Tweets
Do It Theatre
Create a free website or blog at WordPress.com.